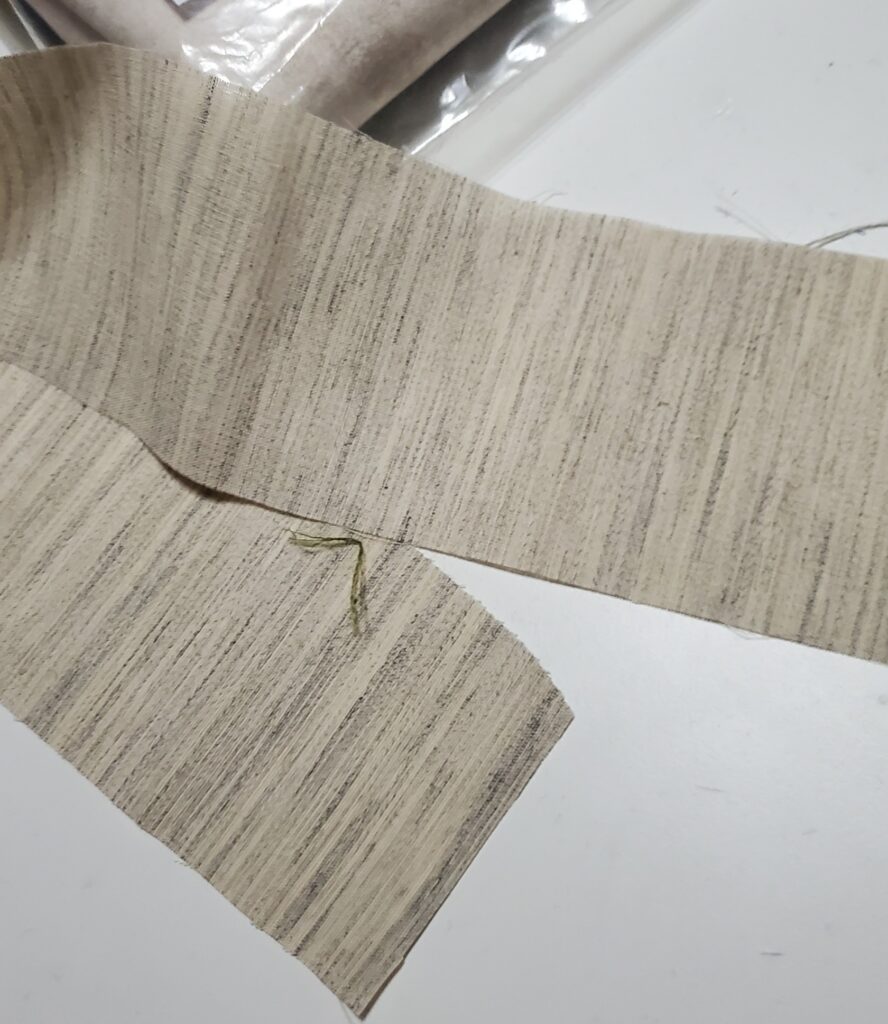 Once the pad stitching was complete (okay mostly I just needed a break from it), I moved on to other sections of the coat. I started with the patch pocket flaps. I used fusible canvas for these and cut the canvas 1/8″ shy of the seam allowance to allow for a crisper edge when rolling the seam under. Once fused, placed right sides together and sewing the 3 sides together, I used pinking sheers to clip close to the seam lines, turned them right side out, pressed and basted the top edge.

I repeated the process for the 2 belt pieces and for the chest pocket flap as well.

For the rear of the coat, I used 2 leftover pieces of hair canvas from cutting the front of the coat to reinforce the seam that connects the tails to the back.

I stitched the tails sections together, but only part way. I wanted to leave a split in the tails to allow for easier movement getting into and out of my 4Runner. I’ve had issues with long coats getting in and out of vehicles. Leaving a split in the tails helps with this (or at least it helps me). This is the reason I cut the tails a little wider to give me a wider seam allowance, so when I fold the seams back, there is plenty of room for leaving space between the tails split and where I will stitch the lining in later. It’s a pretty noticeable lining that I don’t want to be a distraction.

Preparing the upper back is fairly straightforward, but the offset seam may be a bit confusing the first time around (also a reason making a mockup is useful). The offset seams are both sewn independently, face the right down and squash the lower section out evenly to create a box pleat. Baste the bottom of the pleat and press.

You might think that the leaves some weakness in the back. Bring in more canvas to stabilize this area. I went through all the trouble of marking the canvas and then realized that I would not be able to visualize the vertical seam if sewing from this side. So, I pinned everything in place and then I transferred the markings to the right side of the fabric, and finally stitched it all together with a #30 silk thread. Once done, I pinked the edges of the canvas and called it complete.

After basting in the rear shoulder reinforcement hair canvas, I pinned and stitched the waist seam, pressing the seams upwards due to the bulk of the tails section (the fabric, not mine). Once the seam was done and pressed, I basted the belt pieces onto the coat back so I wouldn’t forget them when stitching the side seams.