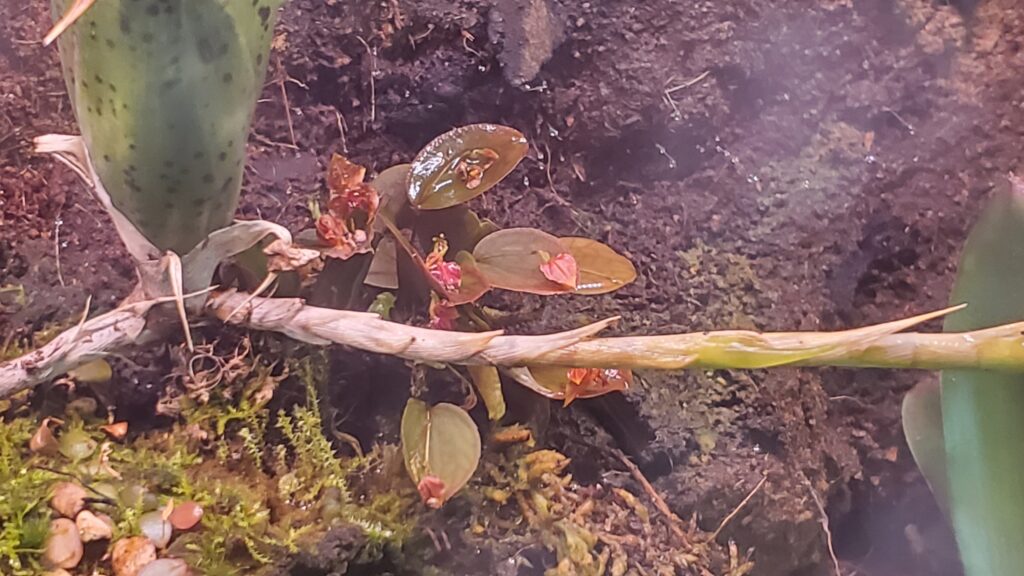 This Lepanthes took to the terrarium in no time and is a constant bloomer. This orchid is about the size of a half dollar. In the lower left there is a Barbosella orbicularis that is establishing itself on the ledge with varying degrees of success, and a Neoregelia pauciflora sending off another pup across the 55 gallon terrarium.

I have 3 of these and this one was an accidental propagation. While removing some rather aggressive moss from the tank, it took a hostage with it. The hostage was saved and has been throwing blooms ever since. Looking forward to seeing the orange and yellow gradients when they finally decide to open up.

I was certain this Masd. wasn’t going to survive its first week, but after nearly a year, it appears to be happy in its home. This bloom is about the size of a small fingernail.

I have 2 of this variety, this one being the newest… and the first to throw a bloom! I am hoping this one opens, since the first one kinda petered out and fell off before opening.

The bright yellow throat and the magenta staining looks much better in person. Cattleya and I have a wildly swinging love/hate for one another. This particular orchid has a great fragrance when up close!

This will be the second round of blooms for this orchid this year and are a wonderful pure white. This round however, did not emerge with a bloom sheath. No comments from the peanut gallery about focus…

This orchid is one of my personal favorites! This is the third round of blooms this year.